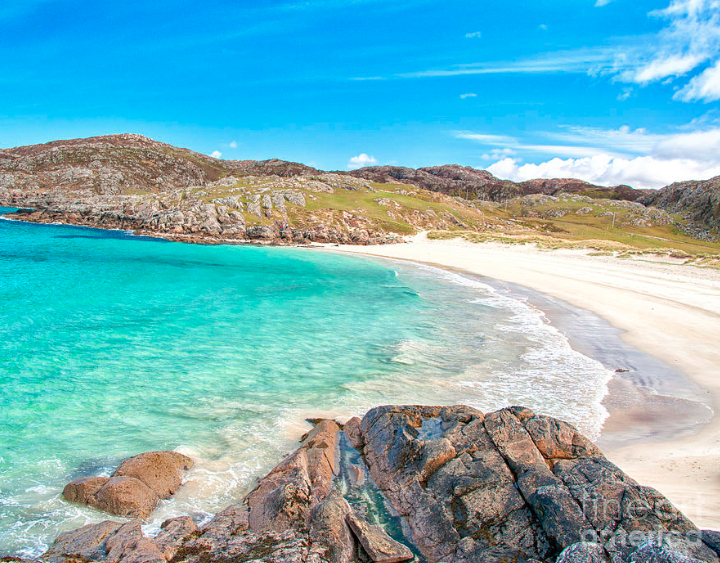 Better than the Caribbean

Many people mistake photographs of Achmelvich Beach for holiday destinations in the Caribbean thanks to the blindingly white sand and shimmering turquoise water. Achmelvich beats some of the most well renowned beaches in the world that I have been to.

Rife with water activities during the summer months, you will find people water skiing, and kayaking in Achmelvich Bay during when the weather is good. People often fish from the rocks or from boats in Achmelvich. In addition, there are nearby lochs in which you can fly fish for salmon and trout.

People often climb the hills around Achmelvich Beach to get a great view of it and find surrounding hidden beaches that are completely secluded and can only be reach by a walk. These include Vesty’s Beach, Altnabran Beach and others so small and secluded they do not have names.  For those who prefer bagging munros, Achmelvich Beach is close to Suilven, Quinag, Stac Pollaidh and Canisp to name a few. I’m not sure you’d catch me climbing one of them though, I don’t think I have the minerals.

Very near to Achmelvich Beach you will find a hidden gem, the Hermits Castle. A tiny castle built on a hill fitting only one person at best to stay in, this now uninhabited building was once home to the architect and builder of it…. for only one night. Since then it has laid empty and has been an interesting place to visit the beach. It sounds like the ideal place to retire for me, I can retire at 25, right?

There are few beaches in the world as beautiful as Achmelvich Beach. We would highly recommend visiting in the near future to take in the beauty for yourself!

Find out more to do around Achmelvich Beach here!

Find out where to stay near Achmelvich Beach here!